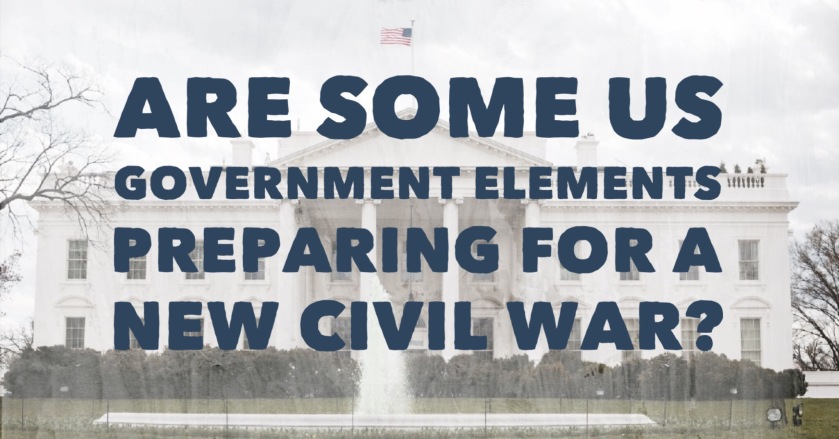 Looking at all the data over the past two years it would appear that some governmental elements are preparing for a new 1861 American civil war.

Consider the mass purchase of ammo and weapons for EVERY government agency, the militarisation of the police, the stocking of larger numbers of 4 person plastic coffins with lids, the unconfirmed purchase of perhaps 30,000 guillotines, the conversion of warehouse premises to FEMA (concentration) camps, the training of troops in home urban warfare and exercises for that, the signing of executive orders for confiscation of resources and draconian control of US society, curfews etc, the practice of city lock downs, the staging of false flag social engineering and the total control of media to spread consistent but false lies, propaganda.

Does all this smack of NAZI Germany in the 1930’s to say nothing of the moves to confiscate citizens weapons and the destruction of the Constitution? The deliberate importation of dissidents and illegal aliens and the bringing of all controls into the White House, removing experience military commanders and replacing them with ‘Yes men’.

Against which one has to consider the spirit of the American people, the land of the free, or as it once was. The question is in the coming elections, any which way, there are going to be a lot of dissatisfied peopled potentially civil unrest if deception is suspected or the elections are rigged or delayed, may be deliberately to kick it all off, reduce the population and try to bring in an Orwellian State in the name of “Peace Keeping,” perhaps involving UN Forces.

Is all this paranoia or the mad plans of mentally ill psychopaths, who think they might pull it off, while starting, if they can some overseas conflict to justify their internal coup d’état even deeper than 9/11. This coupled with a potential financial ‘reset’ the devaluation of the US Petro $ and you have a very serious set of reasons to be on your guard.

Believe nothing the MSM tells you. Research the real facts. The oligarchs are getting pretty desperate in their moves and not so concerned with covering them up. Blaming it all on some overseas power is unlikely to stick this time so more dramatic US internal measures should be expected.

THIS IS NOT A DRILL. Examine your comfort zone now.